Rafael has been part of the firm since 1991, making partner in 2004. He is an expert in labor, immigration, administrative, public procurement, litigation and energy law. Notably, he has advised some of the most recognized companies in the energy and telecommunications industries such as Energuate, Ufinet, InstalCobra and Gas Natural Fenosa. In 2014, he was awarded with the official cross for civil merit by the King of Spain, Juan Carlos I.

He is the President of the Official Spanish Chamber of Commerce of Guatemala and ASCABI, the Association of Binational Chambers of Commerce in Guatemala, winning recognitions for both. He has been a member of various professional associations, chambers of commerce and foundations, as well as sat on the boards of companies in the technology, energy and telecommunications industries. For years, he has also taught law at Universidad Francisco Marroquín, his alma mater. 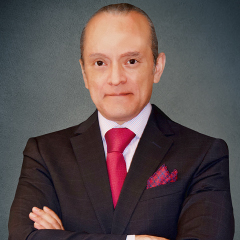